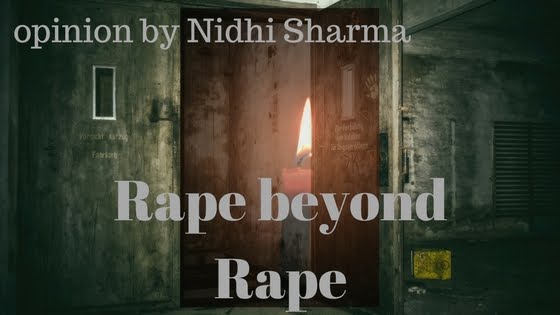 Have you ever witnessed a rape beyond a rape? In the wake of the recent Kathua rape case (which, by all means, was no rape at all), we have to understand when rape moves beyond its periphery and hounds the victims and even more, hounds every girl who comes to know about the heinous crimes. Without going into the merits of the ghastly crime against a child, Nidhi writes the other side of the story which has become a 'suffix' to such kind of crimes as 'post-crime' protests and off.

I happened to talk to someone today who shared an incident. It was about someone's reaction to this recent gory incident of rape of a minor girl on social media where they tried to pick up the issue of religion over this shameful act.

I ask those people a direct question, if they don't take a stand on this issue, are they having an assurance of the safety of their children in India. I understand to say this, they must have gone through something really terrible but isn't it true that "an eye for an eye, will make the whole nation blind." We have to put an end to this somewhere, somehow.

Nirbhaya, Unnao rape case and now this Kathua, we are hearing day and night, girls being horribly raped. Candle march for rape victims, people of great designations coming down to oppose the ones in power, this is our only reaction to these vultures. We hear and see everything and then comfortably sit on our couches, after switching off the television sets. Then we pity, talk to our friends, criticise the government, rapists, and come back to our daily routine, that's all we do.

But the question here is, what else can we do? We are commoners, trying to safeguard our daughters from vultures eying them from distance. Some of us succeed to hide them, some of us fall prey to them. But ultimately all of us fail. The nation fails. Its because we are only and only thinking of our daughters, keeping them safe. We never think of the girls, studying, working or travelling with our sons. We have to teach our sons to be better than what they are, to safeguard the daughters of the nation.

Another issue that comes along with any such incident is the sensation that media brings. A girl being raped is already in itself a devastating issue, why at all do the media and social networking sites have to try to be spicier on this sad part. It's an unbelievable truth that our own families are hiding these wolves dressed as gentlemen, who try to put women down in some way or the other which ultimately results in these horrible rapes. It's sad to say that these rapes are few ones that are recorded and they come to light. There are still shocking ones safely put under the quilts of honour of the families, some high profile and some lower.

I personally feel that all the men, if they put their foot forward to respect every girl, every unknown girl that they see on road or near them, this brutality would not happen. It's not merely the rape of the girl, it's humanity that's raped. We can't even call these men animals. Animals are far better than them. They don't have brains but have sanity. India as a whole is put to shame by these people, who for religion, for politics, commit such heinous acts. Daughters, yours or mine, are ours. Giving them a safe environment to grow is the need of the hour. Respect daughters, they are the pillars of future. Don't let them live with this fear which is worst than death.