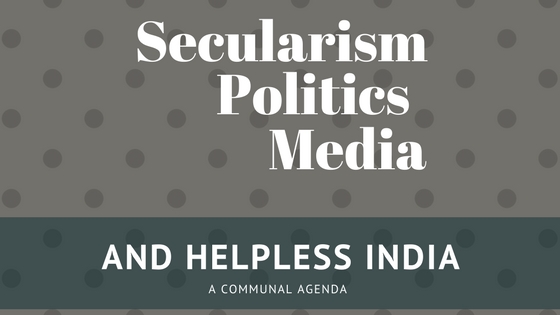 For God sake! What has gone wrong with our media today? The fourth pillar has fallen on its knees and has succumbed to the new definition of the much-debated term 'secularism'. For some, secularism is something which is nothing other than naming and shaming just one religion and trying so hard to defend even the worst and indefensible cases of extremism in other religions' ambit and we are witnessing it every now and then without a pause, ceaseless and over the years. We have been reading the 'journalism' by anoetic reporters for these 3-4 years without even the verification of the facts which is the basic rule that every journalism student has to learn during the days of study. What has gone wrong? Why is our media so anxious? Why has the term 'secularism' pierced the hearts of many? Today, the country seeks answers and we know we have none! We all know that there is some problem but we all know as well that there is no arcana which could provide relief at this hour of 'intolerance'.

The divide in media and the almost all the fields is apparent today. We see people speaking on some topics they choose and remaining mute on some of the topics they don't want to speak - that's their prerogative plus hypocrisy in the best of its form. Senior journalists and conspicuously biased names like Shekhar Gupta, Sagarika Ghosh, Rifat Jawed, Rajdeep Sardesai and many others are always found keen to drive the car of their primitive political bias in every possible way over anything that takes place - howsoever serious and howsoever light. Their agenda is, just drag Modi; drag Hindus; drag religion; drag crime against the minority; hatred against Muslims; atrocities against Dalits in everything they get to write or comment. And that's, my friends, is secularism for them! And we can say, clearly, people like the ones mentioned above make their own beau monde which runs on their beau ideals.

This is the secularism which termed the country intolerant and the entire population terrorist just because of a very horrific and unfortunate murder of a Muslim man named Akhlaq who was murdered by goons and miscreants in the name of Gau Raksha. Well, accepted; that was intolerant. Then why call this a communal clash over way to go when a Muslim man shot a Hindu boy just because he chanted Vande Mataram or hoisted a tiranga (or even the saffron flag)? Is it not intolerance? Is the murder of Chandan Gupta not qualified to be called a murder because of extremism or intolerance? Media remained largely mum because it did not suit their agenda. They were seen justifying it just because the guy was Hindu and he was chanting Vande Mataram in a Muslim area which is, by all means, 'provocation'.

Love Jihad, even though serious concerns are there, I don't agree with the philosophy of it. A boy and a girl, when adults, should be free to love and marry each-other if they want. In India, however, it's not possible yet as we are still living in the stone-age in the terms of our choices against the norms of the society. Recently, there were two incidents. A Muslim person was shot by a brutal criminal in Rajasthan because of the 'Love Jihad' suspicions and a Hindu boy named Ankit Saxena was murdered brutally in the street in front of his family because he loved a Muslim girl and she loved her back and they wanted to marry. The first incident made it to the high-lines and country was once again tainted black and there were cries and yells that minorities are living in fear in India. Is this a secular fear, media? A person in fear can go around and kill a person who, supposedly, is the oppressor? The Ankit Saxena incident could not make it to the headlines because he was a Hindu and the media is secular enough to understand that a Hindu killed in Kerala or Hyderabad or Delhi does not meet the guidelines set by them to be a brutal murder because it will certainly ruin the secular fabric of the nation.

For our bloody politicians, it is very convenient to seek Muslim votes by playing the minority appeasement card but they do know very well that Hindus are of various kinds - Dalits, upper caste, lower caste and so on... and ultimately, the media, the politics, the national interest, patriotism, secularism and everything else is all about nothing but the vote bank! Lives lost don't matter to them unless their lives matter to their politics. Secularism is a joke and it had to be a joke when the nation was divided into two parts just because of religious beliefs.

by a communal reader