Why India needs to play on fast pitches? Opinion 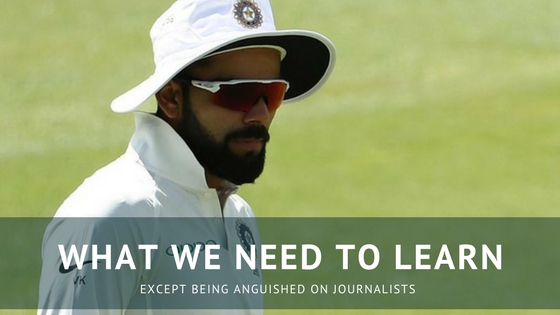 I still remember the advertisements on the TV prior to the series against South Africa on their domestic pitches that we will avenge the 25 years of humiliation against them this time because the team that has gone to play is number one with an aggressive attitude and a much aggressive captain. However, what has happened until now is just opposite to that - we have been humiliated yet again and nowhere in both the lost test matches we could even give the South Africans a lion's fight - we were the cubs throughout, admit it!

Now, that the series has been lost and our hopes have been dusted, we need to introspect on the values which we need to adjust. What has gone wrong? Before we ask this question, we need to ask what has gone right? Nothing - we have been winning on sand pitches and hitting double centuries in the one-dayers and hitting even triple century at just the beginning of the career! One odd day, when the match was in Kolkata and the pitch was a little grassy and the weather was a little hostile, our batsmen have collapsed and we lost the match to our favourite opponents called Sri Lanka! Do you see where the weakness is? We are too much dependent on our strengths and we don't want to workout our weaknesses maybe because we love being humiliated on our tours.

Virat Kohli, let me say it frankly, needs to learn a lot! He is seemingly arrogant and I will not go with that narrative because this is just a perception. However, he needs to learn to accept the defeats and acknowledge the same. He is not a good batsman when the conditions are against him and don't tell me that a century was there - Shami also batted well with more than a cent-percent strike rate in the second innings and Rohit made more runs than him - are these both better than him, by this logic? Leaving aside batting, he needs to be the captain of a losing side as well. Losing temper on journalists just throws away a bad light from his personality which is otherwise gigantic and cool!

I am not at all in favour of a stamp in the terms of cricketing coach and if we need to do better in the rest of the tour, we need to get a better and complete coach who could actually coach the team rather than be playing an alter-ego to captain Kohli.

We need to take harder steps of the performance on the hostile lands will always be like this - hype and lose!