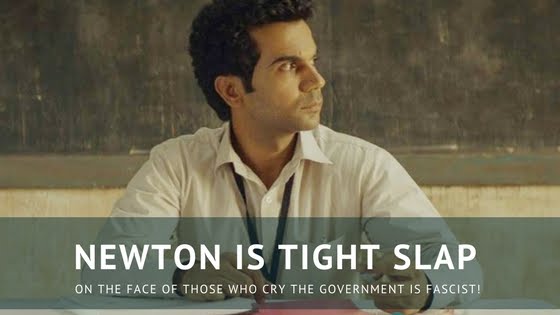 Recently I saw the much-talked-about movie Newton which also represented the case of India at academy awards previous year. Let me say at the outset of anything else I say, the movie was fantastic and it is just way ahead of the Indian cinema! Acting by the lead characters Rajkumar Rao and Pankaj Tripathi has been awesome and I can bet that no Khan from the Bollywood could have made this movie the movie it has become! Newton was fantastic!

The point that I want to make (shooting from the shoulders of Newton as other critics have done) is very simple. Do you remember that a few months ago when the movie by Akshay Kumar, Toilet Ek Prem Katha was released, the same critics were too bashy about it? They openly claimed and cried that the movie is nothing but a Modi propaganda. Well, why was that called to be so? Just because it barked the reality - the reality which is a reality indeed without a shred of doubt. Newton, however, does the entirely opposite thing - it almost tells the viewers that Naxals are nothing but people who want the better of the country and who just wish to make things work - is Newton a Naxal-propaganda? No critics even mentioned that because it suits their narrative and they have a chance to bash the army because the army has been portrayed in the lowest of light in this movie which is NOT the case!

Moreover, the liberals and the pseudo-revolutionist should always remember that if the government were so fascist and the nation was so intolerant, a movie like Newton could never have gone to the Oscars! The success of Newton is a testimony that there is ample space for dissent in the country and creative freedom could be nothing better than this. They should stop beating their sorry breasts now like Prakash Raj types of actors do every day!

Rajkumar Rao is a slap on those hypocrites who always claim that the nation has been degrading. Fools, just watch out and open your eyes - you can do whatever you want. There is no ban; there is no censorship. Censorship was the day when A R Rahman had a fatwa and Sonu Nigam had a bounty on his head just to say what is true and fact. The underlining is that Bollywood is Hypocrite with a capital H!