Nationalist vs anti-national: The Debate & the Drama 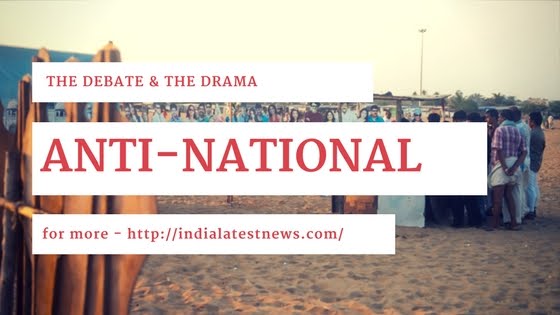 Even the nation! This is a sorry state in the country that even the nation has not remained untouched of the petty politics that the politicians in the opposition and the ruling party play. Leave aside the marginalised and historical left parties in India who are biting the dust as some pages torn and thrown of a notebook which is no longer useful, even the mainstream parties like Congress and the BJP are also not sparing the nation. The intense debates that we are regularly mock-participating on the news channels and the horrendous opinions that we get to read in the national 'reputed' newspapers every day are leading us nowhere - as a nation, we just stand divided - pro or against - in the terms of politics, it might be a good case but in the terms of a nation, we are certainly not marching in a right direction!

Nationalists and anti-nationalists; do you think this is a right ramification of the people? Well, from the outside, it might look instantly justifiable because the people who don't support the idea of a nation and who don't stand up for the right causes of the nation are certainly anti-national! People who talk about the pieces of the nation and people who talk about the propaganda of China and Pakistan are certainly aligning themselves with the enemies and they are all valid to be called anti-national and no one can argue contrary even if they give thousands of explanations to their stands. There are newspapers like The Quint (online) who go on and give their helping hands to Pakistan by offering an article out of nowhere and without any proof whatsoever that Jadhav is an Indian spy and later, they remove the article and post a warm 'sorry' message. What is this? This is called anti-national propaganda and it certainly cannot sit home with the freedom of expression argument in any case!

So, we have defined anti-national; what is the definition of nationalists? Who is a nationalist? People who claim to be nationalists should prove it likewise. BJP, which claims to be a party with heroism for the nation and always the right-thinking people, should prove it likewise. Why can't they even punish the appropriate anti-national people? Why nationalism remains only in the press conferences and tv debates? When will we see some action happening on the ground? These are some tough questions that need to be answered properly if BJP wants to be a true nationalistic party in the coming days or the people of India are really impatient when it comes to taking important decisions.

And for the people, we the people idea should be the top. We all should learn how to respect and how to properly criticise the nation we live in. The usual rants from either side are just bread without butter!
India Nationalism vs Antinationalism