How IIJNM is grooming future journalists - an insider account 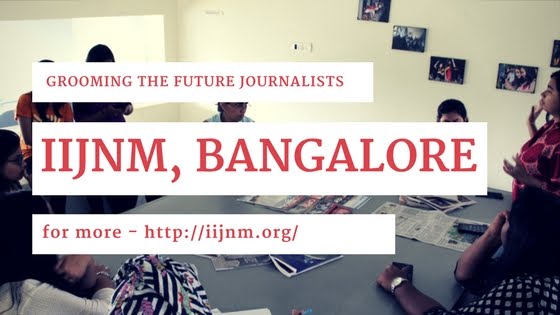 Since the foundation of IIJNM in 2001, an institute of journalism in Bangalore, it has been shaping the journalists of modern India. With the changing contours of the definition of media and journalism in the country and the world, the aspirants have to understand the advances that the industry has made over the years and most of the institutes often lack that 'modernist' approach in their curriculum as well as aptitude. IIJNM, however, has been proactive in this regard from the very beginning. The faculty members always take care of the relevance of what they are offering to their students and their practicals always enlist the activities which help the students getting an account of the present-day media functions.

Talking about the role of news media, Surekha Deepak (with over a decade experience in the field of media and films), the assistant dean of Broadcast Journalism, says that:

"The news media’s role is also to bring to the public forum policy decisions and encourage transparency, and accountability in governance.  Freedom of speech and the right to dissent must be protected. Nuance is important to understand a news story and media must report responsibly and provide a platform that encourages constructive dialogue.  The role of the media is to inform people and make them think about these issues, and at the same time it must guard against mindless propaganda and news put out by unverified sources."

And these ethics are not only taught to the students in theory but also, at IIJNM, Bangalore, they are given assignments based on the employment of what they have learnt in the classroom. The focus, Surekha tells, should be in doing a justified journalism which makes the society think about certain issues which need proper attention and possible remedies. And that's why the students enrolled in IIJNM are taken to do ground reporting in the rural areas nearby the institution and sometimes far-off as well.

The first-hand experience of using what the students have learnt in the classroom offers a kind of industrial exposure to the students and they are better equipped to demonstrate their skills with certain reports and coverages on their CVs which they often get published in the local as well as national newspapers. So, in the terms of expertise, IIJNM offers its students a very smartly designed infrastructure which helps them properly in the terms of their learning and furthers their career in future.

Talking about the emerging Digital Media in the country and the world, K. S. Dakshinamurthy, the man who helped extensively in the launching of Al-Zajeera's English version website, has to say the following:

"The emergence of the digital media has changed equations in favour of the voting public. Since news over the Internet is not bound by time and space they pose a formidable challenge to opaqueness in governance. The power and reach of Wikileaks, for instance, has rattled many countries that attempted to hide their actions from people. On a smaller scale, innumerable websites have gone ahead and published news stories that the traditional media was scared to touch for fear of offending governments or big corporates.  In that sense, digital media has brought in hope and the optimism that no longer can let the governments get away by misusing their positions or by furthering actions that reek of the worst kind of maladministration and hubris."

With over three decades of experience working with different media houses in the country and the world, K. S. Dakshinamurthy teaches web-journalism, international reporting and political reporting to the students at IIJNM.

IIJNM, which has emerged as one of the best institutions in the country for journalism in the recent years, has helped many students launch their path in the field of reporting and broadcasting and print journalism. It is inviting applications for the current year and students can do the same by visiting their website. And the institution is also offering scholarships and fee waivers to the deserving candidates who want to pursue the course and come from an economically challenged background.