When Feminists Meet - a workshop on Women Issues in Magadh University 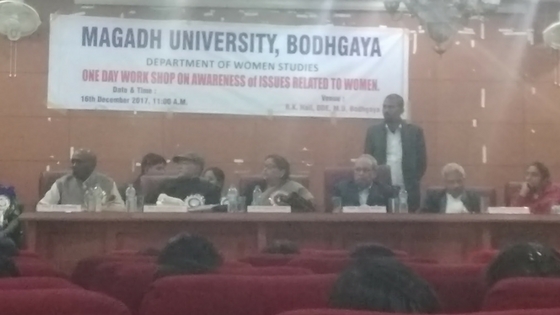 Today, there was a one-day workshop held under the aegis of Department of Women Studies, Magadh University, Bodhgaya. The main motto of this workshop was to come out with some important facts regarding women-related issues and spread the awareness among people. Many elegant and reputed scholars have presented their papers in today’s workshop. They were well educated, well-versed and have mastery over eloquence of the speech. The recently news-controversial vice-chancellor of Magadh University was the chief guest of today’s event. The seminar hall was packed with the audiences and they were very active in listening and questioning as well.

First, the host and head of women’s studies department Prof. Kusum Kumari started the discussion by welcoming all the distinguished delegated and laid a wonderful foundation for the next speakers on the platform as well. Her view on this topic was clear and well defined. She totally disagreed with the usual talks that we have to listen, that discrimination happens due to tradition. She explained there is a thin line between tradition and individual right and we must follow both at the same time. Only, you cannot abuse tradition and culture for all what’s happening around us. If you ask me personally, I liked her speech so well.
Second, Speaker was Mrs Mamta Mehrotra (principal D.P.S world) Patna. Her topic was domestic violence. She handled this topic well and brings out this topic from a mere physical torture. She wonderfully explains violence in many dimension academically, mentally, economically and socially. Her main focus was to divert listeners mind from the classicism of this word domestic violence and focus on those issues that are still untouched by even feminist activists.  She too explained the hypocrisy of feminist activists about sensitive issues regarding women.
Third Was Mr Rajyabardhan Sharma (Rt. Addl D.G.P, Bihar) who strongly presented his arguments like the way a police officer should handle such issues. His topic was ‘women trafficking and women’s right’ and he presented this topic in a technical manner with fact and figures. He revealed some interesting data about human trafficking and clearly explains it that trafficking does not mean all the time prostitution only. He talks about 498(A) their issues and misuses and how he had encountered such situation when he was in the profession. His arguments were full of information and were of great help for the listeners.
The fourth was Mr Kumar Shubhmurty (chairman, Bihar Bhoodan Yojana Committee) and his topic was ‘Gandhian view regarding women and child marriage'. If you ask me honestly, Gandhian perspective was missing on this whole issue. He simply gave an example of Jayaprakash Narayan's wife and Gandhi’s wife. If you called it something like the Gandhian view, then I am sorry. Though, he throws light on what happened when child marriage took place either she is a girl or a boy.
The fifth was Dr Kalpna Shastri (chairman, Samudaya) and her topic was ‘Awareness program on women related issues’. She was giving a presentation about how she managed to develop awareness programme among Marathi women. In the most suitable manner, she explained the dimensions of women identity. I was shocked by listening to this that women had forgotten their name in rural Maharashtra. She not only helped them in finding their social, economic and spiritual identity back but give them a weapon of confidence which no one can steal.

The last speaker was Dr Sunita Sharma (B.D. college Patna) and her topic was ‘women empowerment’. She was doing technical analysis of women empowerment programmes. Sometimes agreeing with those sometimes disagreeing. What I like in her speech is, she is still accepting with the classic that only education can wife the bridge. If we provide liberty to women, they can prove themselves. She was also elaborating the argument presented by Mrs Mamta about good touch and bad touch.
Now, it’s the time to provide my opinion about today’s workshop. Though, It was full of information regarding the women related issues but full of usual rant what I have been witnessing since I first participated in Nalanda College workshop on gender discrimination. Still, the pain of ignorance can be judged in their voices. I am not saying because I am not aware of these types of hinges crimes but when we overrate any issue it will become a dull and unimaginative concept. I know good touch and bad touch and when DGP sir told that first gender-neutral law came into existence in 2013 after 66 years of independence, till then where were the activists. Of course, the workshop was fruitful and very informative. But in my personal opinion, I just want to conclude it in just two sentences.
Feminists don’t really care about women abuse or equality! All they actually want is a subversion, feminization of male and a preferential treatment. In the case of Indian scenario, a man is guilty until he is proven innocent and a girl is innocent until she proven guilty.