Posted by India Latest News on December 27, 2017
Lessons for BJP from the Gujarat Elections: 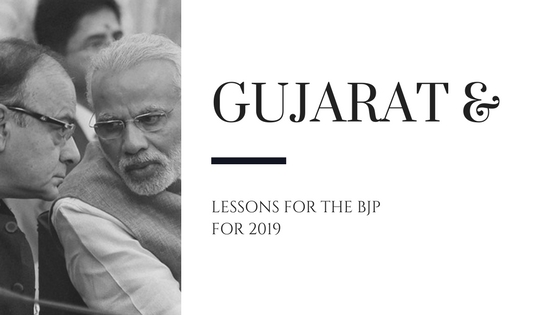 Whether Amit Shah acknowledges it or not, BJP was playing on a wet wicket in this Gujarat assembly election and once it shocked the stock market too when for sometimes the Congress seemed taking the lead and moving towards a majority on the result day. However, the creator had something else in his mind and he saved the market from crumbling and collapsing and somehow the BJP managed to win the election and formed a government with a clear majority but not a convincing one.
It should be respected nonetheless because they have defeated the so-called anti-incumbency of 6 long terms! However, there are certainly the things that the BJP will have to worry and amend if they are serious about the 2019 Lok Sabha elections.

Local Leadership: Believe it or not; had Modi not done his tireless campaigning, BJP might not have the last minute edge and it could well have missed the train already! It is Modi Magic for them which is giving them states after states as well as retaining the current ones. BJP will have to develop leaders on the local level who can make it easy for them. They need communicators like Narendra Modi which is too hard to get for them or anyone! Still, they have to work on it.

Issues: They cannot turn their backs to the important issues like jobs and security and justice. Jobs are there but not in the form the people want to see. If someone thinks that only government job is the key, that person will surely be frustrated because he can never understand the importance of self-dependence and the BJP will either have to convey the same to that frustrated person or they will have to create jobs in the various government sectors.

Majority Management: Believe it - there are the people who have voted the NDA government to power just because they have promised that Ram Temple will be built in Ayodhya on the Ram Janam Bhoomi. Where is that? Where are the bricks? Where is the legislation? Where is the out of court settlement? If they are serious about the 2019 general elections, BJP will have to do something in this direction.

Walk the talk: After the surgical strikes, Pakistan was alert for a few days. However, the same is going on thereafter too. So, Modi will have to work with the USA and other countries and he will have to deliver what he promised - teach the confused enemy a lesson so hard that they dare not see our jawans in the eyes!