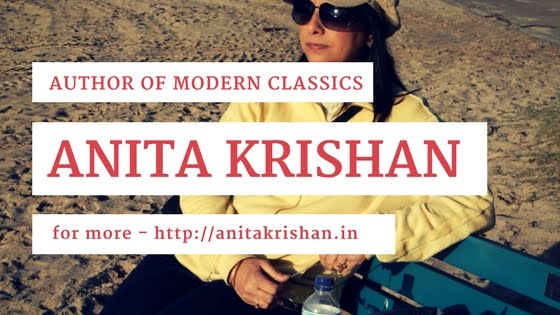 Anita Krishan is being seen as the author who is able to produce the contemporary classics in the modern Indian fiction because her novels have been praised very highly based on the merits of writing that she has displayed in them. Her novels, especially the latest one, Despite Stolen Dreams, and the one which was the first in this terrorism sequel, Tears of Jhelum, have been very successful and readers have liked them both very much.

Born and raised in Shimla, Himachal Pradesh, Anita Krishan was educated in her hometown. After her postgraduation in English literature, she took on teaching at a higher secondary level and she has taught English literature to her various students for more than 25 years and then she took a retirement to pursue her writing career and it all began then. Anita is known among the readers for her elevated language and her broad themes that she offers through her novels. She believes that a novel must be seen not only a medium of textual entertainment but also something which offers a literary relief and decorates the youths with good reading habits.

The writing of Anita explores various themes in different genres. She writes novels, poems and has also written and produced plays during her teaching tenure. However, as she has focused on a career in writing novels, we have so far seen 5 novels from her:


These novels justify the tag of a modern classic writer which is donned by Anita. Her vision of fiction is far ahead of the contemporary authors who often work and re-work a predictable theme and the same storyline. While with Anita Krishan, the novel becomes something entirely different. She forges her works to be universally acceptable because not only they are decorated with the literary ornaments but also with the practicality and a very nearly humane storyline. She connects with the readers of different sections with her language and communicates the meaning of her works very significantly as well as conveniently.

You can read more about her on her official website: http://anitakrishan.in/
#AuthorInFocus #Literature Indian Fiction