Inside the Padmavati Controversy! 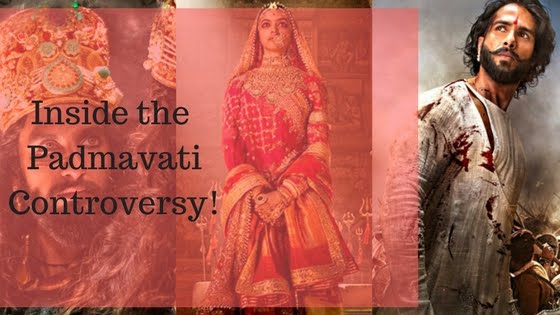 Very funny how, just to make money or to get publicity, some people using even the dead proud Rani Padmavati. It's a shame that although having so many solutions for the issue against the release of the movie ‘Padmavati’, why are not they responding in a fair manner. Yes, history is not that weaker that can be uprooted or can be shaken by a director’s new kind of vision but still why hurt the sentiments of those who are involved, anyhow, just merely to make money? Are we serious? Isn't Sanjay Leela Bhansali rich enough to release his movie without controversy? Is that going to mean him a lot if he shows a few leaders of a fraternity, a special screening of the movie, Padmavati?

The solution is as simple as it is! But just to gain cheap publicity for the movie, he actually encouraged the agony, the pain, buried inside one of the stories we're definitely proud of.
The Jouhar done by Rani Padmavati along with others was not an issue to be presented in such a way that even she, who did sacrifice for her dignity, might come alive and ask, “spare me at least!”

A queen who'd set up a mark for generations to come and follow is being honoured this way.
If Sanjay Leela Bhansali has clean hands, why doesn't he clearly ask a few leaders of Karni Sena to come and watch the movie and then convey the real message to the agitating masses on the streets? Definitely, now when all the nation and many respected leaders of various states are on the side of the agitation of the Rajput community against Padmavati, then why actually SLB is taking direct panga? Why he's denying to spare them a special screening? To be marked that he could do so for some of the media moguls and special VVIPs who are often seen ranting against the VVIP treatment of others!

On the other side, why these Rajput communities didn't raise their voice when the dignity of a 14-year-old was gang-raped and shattered in Sikar or of a woman sleeping outside her house at night by two men in Jaipur or of a Delhi girl when she's gang-raped by 23 men in bilateral, all parts of Rajasthan, the land of The Rajputs. What were these people shouting out for the dignity of a dead queen, doing then?

Both the director as well as the Karni Sena has nothing to do with the dignity of a woman because if it is so, they've raised voice for the women alive also. SLB might have made a movie on the dignity, distorted by 6 men in NIRBHAYA's case or these Rajputs might have made a sena against rape and rapist throughout the country. But instead of fighting against a big issue, there's a cat-fight going on which will lead to nothing but more rage and riots as many political leaders are also misusing this issue as for their profits. And if this rage and agitation continued, it will definitely lead to a big unwanted death toll, Public property damage if this movie got released, that going to be sooner or later, without a special screening.

And if it is not a publicity stunt, then why SLB is hesitating to tell the truth. With so much applauded work done in previous movies, why Padmavati needed so much publicity or definitely there's something worth the suspicions?

by Palak Kundra
Palak Kundra is an author whose recently launched debut book Bleeding Queens has been received very warmly by the book lovers and critics.