Hamilton was a sure joy in Brazilian GP! 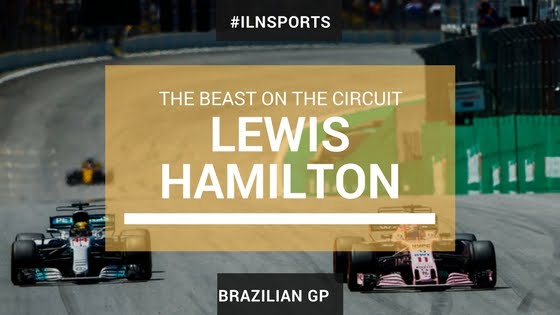 Yesterday's performance in the Brazilian GP has once again proved that seldom a driver can outshine the reigning champion Lewis Hamilton on the track - he is the fastest most often and he is the driver who decorates the most of the skills every owned by any driver in the GP history! You cannot count Lewis off even when he starts from the pit lane - he is your champion, friends!

To say the least, we could only wink once (or maybe even not) before Vettel and Hamilton crossed the finish line and there was rarely a 'considerable time gap' between the champion of the race and the champion of the Formula 1 - this was a race which you would remember for your lifetime! It was a joy to watch Lewis in the full beast mode and his overtakes were just marvellous, did you see? And all this proves that Sebastian has to do a lot in the coming year if he has to challenge the current champion, Hamilton. We will have to wait and watch for the coming race in Abu Dhabi to see what remains the equation there.

Brazilian GP was also a memorable one for Massa as he says goodbye to his home circuit (once again). This one, I guess, should be the final one for him here - and everywhere after the next race, if things go well and Felipe doesn't change his mind again. And not to forget, Massa is surely one of the skilled drivers in the grid for all time; he has seen many things on and off the track and also been in the Ferrari gears for a long duration!

Alonso also enjoyed a good racing this time. He and Massa put on a show several times and that was a joy to watch. His neck-a-neck with Hamilton in the previous race was also a joy and this time he went close with Massa and finished just behind him on the 8th position and this was well-deserved because his Honda engine cannot let him go any further.

Ocon's retirement was also a record one. One race that he could not finish after so many successful roundings for so long. And others were just usual - they keep happening every now and then.

And to sign off, the joy was Lewis Hamilton, for sure! Seeing him in action is a joy which you seldom get regularly. Hamilton, when leading the race, is seldom so inspiring and beastly as he is when chasing people for his victory and the same happened yesterday night. It all goes on to ensure one thing that we will have a good race the coming weekend in Abu Dhabi, race lovers! Fasten your seat belts and get ready for the last action of this year!