To all those who hate Lewis Hamilton - please read! 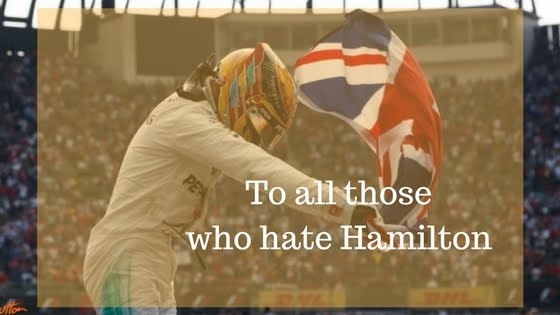 I have read much about Lewis Hamilton on the web, in the newspapers and social media platforms. People have different opinions to offer – some like him; some don’t like him; some love him and some hate him too. Nevertheless, when you talk about the motorsports, Lewis Hamilton is there in your talks – you cannot escape thinking about him! Such is Lewis Hamilton and now a record holding person in the history of the English nation. Hamilton has recently been crowned the champion for this year and has equalled the record with Vettel and others with eyes set for more. He finished 9th in the Mexican GP and still managed to be the king and also continuing his record run of races with points finish and going on. However, there are still the people who believe that Hamilton is not a good driver in the F1 gears. They believe his wins are because of his cars and not his skills. What can one do with such heads?

The time when I heard about F1 racing, Schumacher was the lord of the tracks. I did not know much about racing but there was a tacit respect for this legend because I knew he was winning and he was driving well. There was nothing like ‘a die-hard fan of racing’ injected in me. My love for F1 has started recently, 2 years ago, maybe. I have seen the epic clashes between Rosberg and Hamilton and also the rivalry between Vettel and Lewis and also the rise of another future great – Verstappen. And I am unable to find out why people love hating Lewis? What is his fault? Is that he wins his fault? Because he keeps winning is his badness? Because he loves winning is his devil? I am unable to find the exact reason!

People say that he wins because his vehicle is so good and then I am surprised to see the articles before each race those claim “this track is like ****^^%%% and we can surely say Mercedes will be struggling and Ferrari have an edge” or just replace Ferrari with Redbull. And when the racing happens and Hamilton finishes on top right from the P1 to the podium, we listen to the howls that Hamilton wins because of his car! What is the logic behind your arguments – Hamilton Haters? Why don’t you acknowledge that a great racing driver is driving the car with a speed much faster than your little brains can work? Is it because he is not a white? Is it because he is not so British? Or being frank, you guys are so racist?

Say whatever, people, Hamilton is your champion! And I am sure he will continue silencing his critics in the same manner in the coming years (at least 2) before we see him retiring or fading away like Alonso or some other racing drivers. For now, undoubtedly, Hamilton is the best person on the track! You have to acknowledge the truth and give the guy respect that he DESERVES!
F1 Formula1 Hamilton Racing Sports