And who cares for us? Pro and Anti Indians listen carefully! 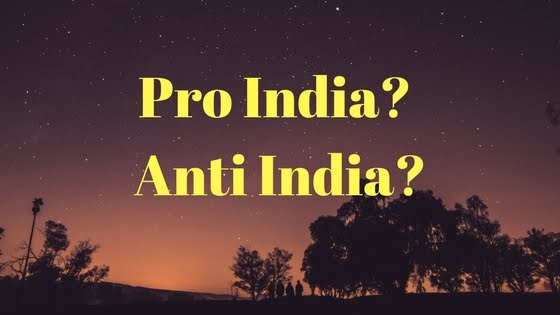 Too much of politics seems to have destroyed the great 'patriotic notions' that we used to have before the independence. We have divided ourselves into so many sections - there are some people who are in the so-called 'intellectual section' who think that all others are deprived of 'good' and 'worthy thinking' and there are some people in the so-called 'pro-India' section who think that all others think against the nation. And there are some people still in between, unable to make their decisions whether to go and mix with this group of that one. For those who are in-between and for those who are in either of the groups, I do have some questions to ask. And I will surely ask as India is my country too as much as this is theirs.

What is India? Is India only the India which came into existence after the independence in 1947? As most of the times the Congress says that those who haven't played any role in the freedom struggle cannot say anything about the country today, am I, then, just deprived of my thoughts about the country I live in? The millions who are young today and born many many years after 1947 have no right whatsoever in this country's history? Well, I find this logic entirely whimsical and bogus! Getting the freedom is not only the task that makes a nation; nation building is a continuous process and each and every Indian is contributing to that in this or that way. And then, the countrymen newly installed at the centre of the national politics, the ruling party, which thinks that anyone criticising the government or pointing out the loopholes is against the nation is entirely wrong too! There must be a space for dissent or there is no country, do remember.

What is dissent?
Now, before the typical hooligans jump the gun and begin defining the term dissent, let me have my say. "Bharat tere tukde honge" is certainly NOT A WAY to register the dissent against the government of government's policies. This is entirely (and apparently) going against the nation and surely an act liable to be sued under the sedition laws! A fair practice in dissent can be called what the media does by going against the government and government policies without having their heads at the appropriate places. Whether to have Rohingya Muslims on our soil or not and the opinions pouring in can also be called a fair play of dissenting against the government. NDTV, and various other media houses, as well as reputed journalists, have suddenly remembered that their role is to oppose the central government and fair that they woke up! Nevertheless, those who are dissenting should also bear what other fellow journalists and countrymen have to say. The dissent can always be met with assent and this is the law of nature in a way!

The real issues: People claim that issues on the ground are not bettering. We are losing on all the fronts and country is going to collapse. We have been listening such claims since the very beginning of our journey as the independent nation. Sometimes the outsiders say it and most of the times the insiders claim such mishaps. Nevertheless, the country has been moving onwards, and so keep being, fortunately! Coming to the important question, does anyone really care about the issues? Many hands will raise and answer yes. However, will anyone answer me why that old man's hut is still a hut on that corner of my village? He is no more and his grandchildren have grown up and married but still, there is a hut only! What about the 'garibi hatao'? What about the Pradhan Mantri Awas Yojana? What about the Din Dayal Upadhyay's antyodaya yojana? Will anyone tell me why are the children still on the road begging for their foods? What about the Right to Education? What about the Right to Food?

Issues, dear country men, are many and unfortunately, we also divide ourselves into sections according to our inclinations and convenience. No one; I say no one worries about the real problems of the country in reality and this is the brutal truth being told to us every day when we see the media houses busy in grinding the axes of their own agendas. They will show you what suits their ideology. The politicians are the same who will do whatever they think will win them the elections... and we voters have to be suffering like the poor tennis ball which is sent to another court after being 'hit' by a player to be 'hit' again!