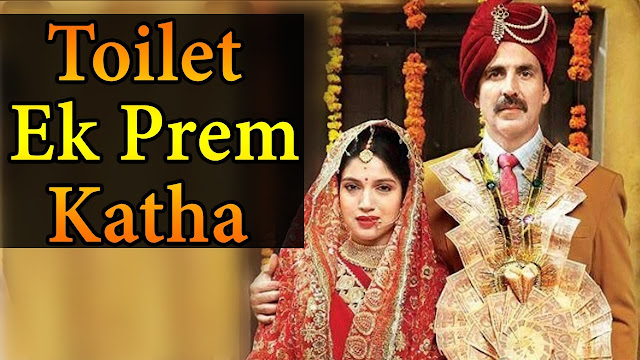 Why you MUST watch a movie today might have millions of answers but why you MUST watch the Akshay Kumar movie Toilet Ek Prem Katha today has only one solid answer - it is realistic unlike the movies which are just fancy-playing with the hearts which break and unbreak a thousand times in modern Indian movies! After Bahubali - the conclusion, Toilet Ek Prem Katha is the movie which could bring India together once again as it plays around an issue which is the need of the hour and we must come together and clean on that. Toilets are the need of the hour and this Akshay starred movie is the need of the cinema today to make people aware of the issue.

The movie is based on the condition of the underdeveloped areas of India where there is still a lack of 'washrooms' or as we say it - Shauchalaya! The female protagonist in the movie denies coming with Akshay Kumar because once she knows there is no arrangement for shauchalaya in the household, she is furious. Then the movie's central plot comes into play. Akshay Kumar gives a few dodging lectures to the audience on the importance of sanitation and voila! He gets the Shauchalaya and the wife home.

In between no shauchalaya to yes shauchalaya, the movie has a lot to offer. You have few really good songs and witty exchanges of dialogues as well as typical Akshay Kumar comedy which thrills you as well as makes you laugh loud! The film is a full entertainment and the social message that it brings with itself makes the movie a master class. You should not miss the movie today evening or tomorrow or if you slip, make use of the independence day and let yourself loose... Akshay is back with a bang!

While the Lutyens media might have underplayed the movie just because it delivers the message of true social justice, you must understand where their prejudices lie - they want to denounce anything and everything which encircles the thoughts of the central government and they might be fools enough (like they were during Indu Sarkar). Go for Toilet Ek Prem Katha and enjoy the treat!