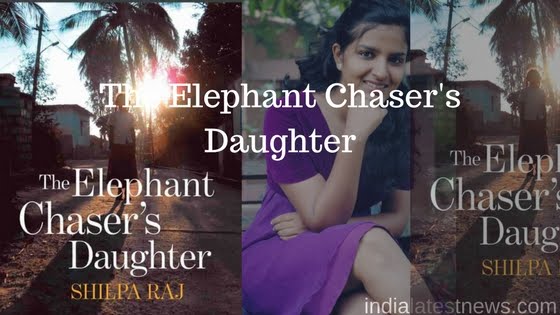 Dear readers, hope you must be reading something and many other things these days. The taste for fiction or nonfiction cannot be altered so easily. We have to make our own choices and stick to those. Nonetheless, we can surely offer our views on things to others and maybe that's a book! Today, I will be sharing my views on Shilpa Raj's debut book The Elephant Chaser's Daughter, which is a memoir. As you must have been aware by my previous report that the book was launched on 28 July (previous month) and since the launch, the book has been taken seriously by the readers across the nation. People have not only been reading but also throwing their reviews on social media and other platforms like Goodreads and Amazon. For the readers who haven't yet bought the book, I have to offer some facts which will tell why one should be reading the book and why Shilpa's book is a must read by all the means.

The issues which the author has raised in her debut book are serious and grave. Shilpa has gone to the depths of the issues and she has really dug out some of the 'root causes' of the problems that we have yet to face as a society in India. Shilpa's memoir, The Elephant Chaser's Daughter is not only a memoir of her own but for the entire section she represents. She has written about the issues which often go outside the general ambit of discourse in daily discussions.

Some of the issues that Shilpa has raised in her memoir are untouchability practice, suppression against women, poverty and economic disparity and so on. You can easily get the gist of the dialogues which send out the agony of the author as well the message that she wants to deliver. You will find this in chapter 9:

"‘When we die, no pujari comes near us,’ Appa murmured. ‘The elephant must have belonged to a high caste.’ Such rituals were done to receive blessings or deflect harm brought about by angry spirits. Unholy untouchables had no need for any such rituals. They couldn’t please the Gods in any case."

Shilpa is talking to her father and he emotionally bursts out in pain but does not let it come out apparently. Do we really need such orthodox thoughts even today? Just today, we have ended triple talaq and many other Orthodox and archaic practices have already ended. How long shall new India take to understand these issues?

The suppression of women is another issue which Shilpa has raised and drawn out graver concerns about that.

She has also written about her own father's bitter behaviour against her mother which eventually led to the departure of her mother for some other place, away from the suppression and 'prison'.

The narrative used by the author is in the first person and quite friendly in the terms of language and choice of words. Casual readers as well as serious readers, both will like the tone and language of the book. And I would like to sum up that The Elephant Chaser's Daughter is not a book which reveals the personal accounts so honestly, but a book which universalizes the personal accounts and sends out a message to the readers that yes, there are two parallel universes we live in. We often care about the world which we live in but leave one in the oblivion (knowing everything in detail).

You MUST read this book and listen what a Dalit girl, a poor girl, an elephant chaser's daughter has to say about her life experiences. You can get the book from the Amazon link below: