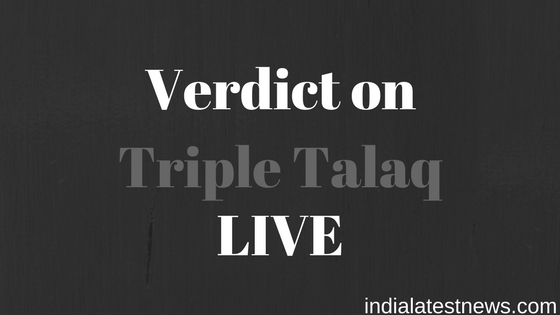 And the VICTORY is here! Triple talaq has gone! Supreme court passes the historical majority judgement and says that triple talaq is illegal and unconstitutional! Great day for Muslim women in India!

Live:
Temporary ban on triple talaq for six months by the CJI! We are yet to hear from other judges. Keep in sync for the updates.

The SC CJI has also directed the government to make laws in the parliament for ban on triple talaq. This is a huge win for the constitutional rights of the women.

Triple Talaq might be breathing its last because very soon from now, the landmark verdict on Triple Talaq by the Honourable Supreme Court will be live for the world to see. Muslim women have been fighting this extraterrestrial curse since long in India and all could be better had Rajeev Gandhi not stagger en route his 'vote bank journey' but better late than never. While most of the Islamic nations have banned triple talaq, India, a 'secular' nation, hasn't done that yet. This time, the fight against triple talaq and for justice was full on as Muslim women came out of homes and demanded equal rights for them. During the vacation, Supreme Court decided to hear the case and everyone should know that who were defending the evil practice - Kapil Sibbal and in a shrouded attire, Salman Khurshid. They both were defending Triple Talaq in the Supreme Court and Sibbal even went to the extent to equating this practice with Shri Ram! Nothing could be more shameful than that!

As the verdict would be pronounced on triple talaq anytime around 45 minutes from now, ILN will be live monitoring and update you on the same. Stay tuned and keep reading the blog on timely intervals. India wants freedom from orthodoxy now! Let's hope for the best!