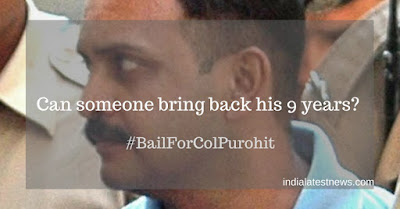 The Supreme Court of India has granted bail to Lt Col Purohit today. Col Purohit is the same person who has to spend nine precious years of his life in jail bearing the stigma of being a 'Hindu Terrorist'. Purohit was (and will soon be once again) one of the most decorated officers in Indian Army with so many badges being donned by him on the shoulder in the form of stars and badges. However, things turned and twisted and 'commands' seem to have come from some other place rather than the high command of the army. Ironically, the person who was supposed to be investigating the case of extremism and working covertly, finds himself fabricated in some blast case and out of the blue appears the phrase 'Hindu Atankvad' and 'Saffron Terror' and just jolts the nation.
Boom! And Purohit finds himself behind the bars waiting to be told his crime which the ATS could not tell him nor the courts of India for 9 long years... hail to the judiciary system of India and hail to the Congress-led UPA government which kept a brave army officer and all his findings suppressed.

Lieutenant Colonel Shrikant Prasad Purohit, the supposed accused in the 2008 Malegaon blast case (which we all know was carried out by the terrorists from Pakistan who were let off on the pressure from the Home Ministry of India, then). This is the classic case how politics can fabricate overnight and build the castles in air and not only that, make actual people believe that they are the residents of that castle... how cruel has the politics been for Mrs Purohit who had to fight against every nook and corner of the judiciary to secure a bail for her husband (without knowing the crime).

Questions will be asked of the Congress party and all the 'secular people' of the country who were too busy in securing a goal by accusing Hindus of being terrorists. People will and MUST ask questions to Rahul Gandhi who had the audacity to tell the American ambassador that 'Hindu terrorists' were far more dangerous than anything else (radical Islamic terror). We all could see how inconvenient the day had been for the intellectual lobby and the Congress leaders. They were seen skipping the press and pushing the reporters and siding their mics.

Whatever be the case, no one can justify the lost 9 years of the life of a happy family and the honour of a brave fighter for India! Yes, I know that he had not been acquitted of his charges which will surely fall to the dustbin some next big day for sure. The agencies which could not even file an appropriate charge sheet against the person for 9 years, what would they do now? Moreover, we must see some examples set by the judiciary system of India by setting up a Supreme Court-monitored inquiry to ensure that the officers who misdid, in this case, should not go unpunished so that nothing like this happens again!
India News politics