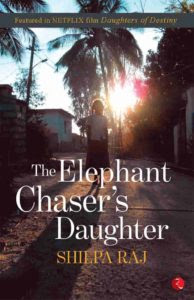 Shilpa Raj's debut book, a memoir, The Elephant Chaser's Daughter, which has been in the buzz for sometimes now, is all set to be released on 28th of July 2017, which is tomorrow. Shilpa's memoir is said to be the documented history of her life until now as well as her family's struggles. The book has been receiving a general positive feedback from various people who practice literature - book critics, authors, scholars. Shilpa's memoir becomes even important because of her credentials - she is the first ever woman from a socially lower community to have written a memoir. She has used this opportunity to a great level by speaking on the important issues which connect with millions of people who live in India deprived of many facilities as well as 'basic human respect'.

The Elephant Chaser's Daughter, the published book today, began in the form of a journal which Shilpa began writing when she was in the high school. Whenever she visited home in the vacations, she used to talk to her family members, grandparents and other people around her. The experiences that her parents, grandparents shared and the experiences that Shilpa Raj has herself recollected as a girl born to a poor and 'supposedly lower class Dalit family'.

This memoir challenges the conventional attitude of people who care not an ounce about the situations which are rather grave and need to be addressed instantly if India is supposed to rise as a state. Shilpa Raj has addressed very emotional issues; very bitter realities; very troublesome situations; and all those which you might have expected from a girl with her roots in poverty and discrimination!

The life of Shilpa at Shanti Bhavan also plays an important role in this book. She writes about her experiences at the school for underprivileged children. She shares the happiness with the readers when she listens to her mother talking in English with ease... she shares the joy when she is about to leave for home on a vacation trip... she shares the story of humiliation that her father had to endure into the hands of the society... she also shares the humiliation that her mother had to suffer at the hands of her father... In short, Shilpa Raj been very honest in her writing!

Now that The Elephant Chaser's Daughter is all set to be launched tomorrow, you can get the book by ordering it from Amazon. You can buy the Kindle copy or order a physical paperback to be delivered to your address. If you are a serious reader, be ready for this book which is surely unmissable! Amazon link to the book: