Posted by India Latest News on July 08, 2017
Rafflesia - The Banished Princess is not a usual book that we casually read on a Sunday. This is a rather complex book which people seldom find and also fund to read. They will surely think before spending around 300 on a book and this book is costed exactly the same. However, the book is worth reading or not is the question that we need to answer. Also, the book is voluminous and we had to spend some time reading it. Once the book is finished, today, ILN is offering a review for the same - the debut novel by Gautam - Rafflesia - The Banished Princess. 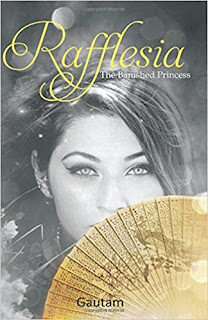 To be clear, don't be attracted by the cover photo. There is no princess in the novel. There is no prince in the novel. And also, there is no giant or devil! There is a guy named Appu who is introvert to an extent and there is one friend of him, named Rahul. He takes care of his friend Appu because he is the guy who needs attention and care. Appu's story is pathetic and also pitiable. This guy almost did nothing wrong but the fate has it and he is served as the sacrifice on the altar of life. He is on the edge of a marriage which only brought misfortune to him. Appu could do nothing and just saw his world going away, falling down brick by brick...

The novel Rafflesia - The Banished Princess is all about a guy who is facing hardships and troubles in his life. It's all about the emotional journey that Appu has to undergo. He has to feel what life is with a pain and how to liberate himself from the same.  Appu does his best and with help of his friend Rahul he manages to get the divorce from Jharna and then only he can feel a little lighter in life. He lets himself loose and tries his best. The ending is meaningful as he gets away from the past and looks ahead to a bright future and waits for someone who can be for him only.

The novel is not for kidoos or rookies who read almost anything. The novel demands some maturity to be comprehended and one has to be patient to read this novel completely. There is absolutely no space for spice in this and the novel is rather black and white - a psychological wandering into the world with loads or burden on one's shoulders!
#BookReviews #Literature