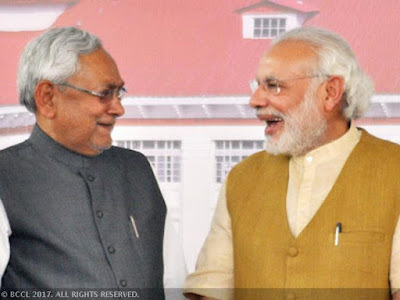 The new political equations in Bihar were made in a flash and the 'chemical bonding' did not spare any time for the pandits to think. They just did not see it coming and kept whining about the unfolding of events. Most of the pseudo-secular intellectuals are just withered right now because they lost a face on whom they could bet in 2019! On Twitter, the people who used to praise Nitish with folded hands are calling him 'Sanghi' and opportunist. Television personalities, liberals and intellectuals are confused on the moves (but dear people, this is what we call politics, isn't it?). However, no one is taking the fact in consideration that this natural alliance of BJP and JDU is the most beneficial for the people of Bihar and the development of Bihar today. This is after decades that Bihar is about to be launched in a phase where the central and the state governments are the same!

The aching hearts of the Congress sympathisers and political pandits prove only one thing to me that what they want is someone to stop Modi in 2019; they don't have anything to do with the development of Bihar or any other state. At any cost, they want the BJP to be stopped! Is it justified?

On the other hand, BJP has shown once again that they mean business when it comes to walking the talk. They have just made one more state 'Congress-Mukt'! This episode must have sent the tremors to 10 Janpath! Rahul and his Congress should be thinking about their future political strategy seriously because their bank has just been robbed by BJP once again!

As the predictable line goes, Congress will play the blame game as well as victim card once again. Along with RJD, they will cry the murder of democracy line once again. However, one must remember the steadfast support of the 'ordinance fado' neta Lalu that Congress is providing. Is it the same Rahul Gandhi who has insulted the silent PM Manmohan Singh by tearing the ordinance? Whatever be the case, one thing is clear that Rahul Gandhi is confused.

For Bihar, this must be a good news that Nitish and Modi have come together. I am hoping for good results out of this much-expected combination.
Bihar Modi Politics politics