High Voltage Drama after IT Raids on Lalu & Family 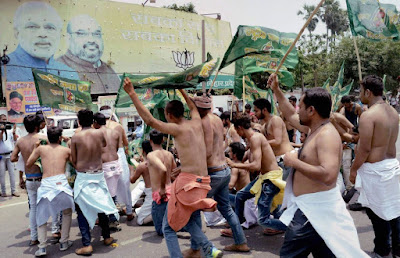 The way events have unfolded in the recent hours is splendid! We have seen raids on top politicians who are well-known for being skin-deep in corruption and one among the two is very popular in the world for having a long-term romantic relationship with fodders. How did Lalu manage to stay out of bars for these many years of his political career is the biggest existential question that we need to ask to ourselves as well as all the political parties. And today we have such a situation in Bihar that his sons are in the cabinet of Mr Nitish Kumar, the sushashan babu… isn’t it amazing? My Bihari friends?

Lalu’s scams won’t shy but our wits would; he has so many of them – from fodder to soil, from benami to hawala. How many would one count? Not only Lalu, his daughters, his sons and also his in-laws are directly or indirectly involved in Lalu’s corruption. Even his wife, Rabri Devi is also involved in the instances of corrupt activities.

It’s so shameless the way his party and his ally partners are coming ahead to defend the indefensible. Manoj Jha and other party leaders (should we at all call these shameless followers of a mafia leaders) are extending the arguments of vendetta and other legal hierarchical wordology which is not at all acceptable in this case.

Most surprising is the silence of Nitish. He isn’t responding to the questions of corruption directly. He is always coming wishy-washy over the questions of the journalists but he must be aware that the day voters ask the questions will be too difficult for him to come clean. Let’s wait and see which way the camel sits now.
Bihar Lalu