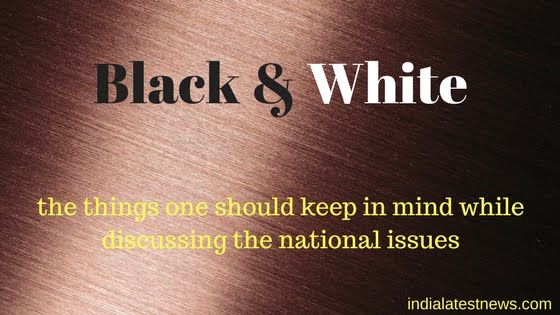 The wounds of JNU are still fresh on the body of our nation which is undergoing several injuries already. Afzal Guru to Yakub, Burhan Wani to Bastar's Azadi, the debate has been going on. The separatists are on the roads everywhere and eagerly waiting for the chance to get their bodies into the university campuses across the nation. We have already seen the seminars which are organised to bash our armed forces and sing the choruses for terrorists, naxals and simply anybody who is standing against the nation. Our sadak chhap netas who are ready to reduced to dust in the coming elections, never let loose a chance for the cheap publicity and just jump into these fire to act like petrol. Rahul Gandhi, Sri 420 (Kejriwal) and many other leftists have already done it this time as well. We all know the episode in detail - why it started, when it began and how did it go. I will not go into the technical details of the Delhi University nationalism vs antinationalism incident that happened 4-5 days ago. Today, there was a Tiranga yatra organised by the students of ABVP who are standing against the anti-national sloganeering on the campus.

I was shocked not on what the students did, I was rather shocked to see some of the university professors with their strong anti-India semantics! Very basic details apply - gurus make their chelas what they are. JNU we all know; DU was still under the dark shadow which is now coming to the light of reality. I have also been a student and I fully support the practice of dissent on the educational campus. The students have the right to say whatever they want, wear whatever they like and do whatever they feel like doing. Nevertheless, as India is a democracy which gives us the rights, there cannot be a concept of anything in absolute. We are all bound to follow the constitution of India which strictly forbids us from 'waging even an ideological war' against the nation, which, unfortunately, a certain brigade has been doing regularly! For what purpose a literature festival needs traitors' sympathiser and terrorist apologist like Umar Khalid, only God knows! Turning any platform into an anti-India forum and fully using the garb of freedom of expression is something that we need to learn from these left or ultra-leftist people!

The role of media in these episodes always comes under the scanner. Mostly, mostly I say, the journalism deceives the nation on such events. They (the journalists) pick only the issues that they think suitable for their narrow narratives and keep ranting it days and nights, boiling the blood of people who have least of the thing called pride for the nation they live in. Only today, accidently I saw an ugly looking journalist Bhupendra Chaubey (or whatever his name spells like I DON'T GIVE A DAMN) calling that fool Kanhaiya Ji, and believe me, I was like - what a load that person is for the nation! And these are the journalists behind the garb of their intellect and fake journalistic ethics who are ruining the sovereignty of our country. Only these guys give the platform to these hate mongers on their shows to spread the evil. WAR IS FOUGHT BY PEOPLE. WAR IS NOT A HOLLOW IDEA LIKE LEFTIST IDEOLOGY OR COMMUNIST DECEIT! WAR IS REAL AND PHYSICAL!

The need of the hour is to give these anti-national guys the least importance and head. Just ignore them on social media and media. However, if you see them insulting our nation in the physical world, don't ignore them. Do whatever you can to make them understand the reality or just agitate, but peacefully - we are the nation of good people. :) 🙂🙂🙂

AT the end of all, I did not write these things at all! My laptop did! Good night Indians! Vande Matram!